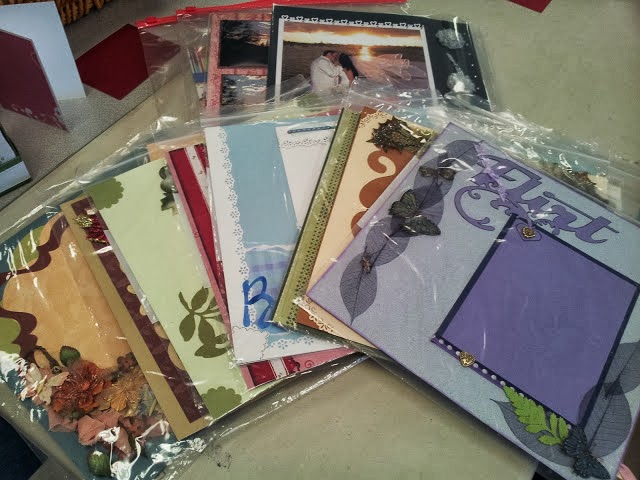 Another Trash to Treasure

A few weeks back, my kids and I went to town for a few things. We were looking in second hand shops for a new record player for my middle son since the needle broke on his,(he is nearly 15 with a love for old classic rock vinyl)- anyhow, i came across a few wooden jewelry boxes and i picked them up for nearly nothing and decided that I was going to alter them. The first one turned out great. The second one I found I knew would be a challenge. I'm not gonna lie... it intimidated me.
The back looked simple enough but there was do much space to cover on the front. 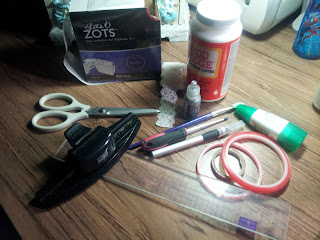 I starred at this project for nearly two weeks before I decided to give it a go. I gathered up my supplies, picked out a packet of paper I have been hording and set in for the challenge.
I started by measuring ever space i was going to have to cover. I wrote all the measurements down and drew a low budget sketch of my plan.

I decided that this project was going to stretch over a few nights of work so i tried not to rush anything.  I began working on the hardest parts first.  I had never used glittered paper for a project before and although it was looking very pretty, it was sure hard to work with. 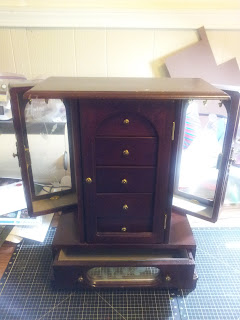 I am not a big expert with "Modge Podge" and it has taken me some time to figure out that you have to be careful or the paper will bubble. I applied a light coat to the wood and an even lighter coat to the paper. 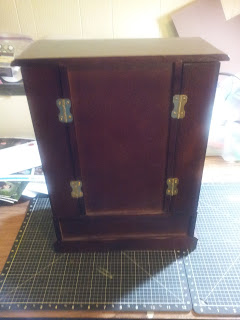 On the areas that contact was critical, I used Tacky tape. I love that stuff... a little spendy, but in the long run, well worth it. As I worked through the first day, it started to come together pretty nicely.

As I cut out the framed edges for the front doors i knew that I was going to have to come up with something to make it look decorative, it was in fact the front of the piece. I reached for my silver Stickles. It matched to glittery paper I was already using. I carefully squeezed the stickles around the arch. **Important Note** Stickles drying time has a mind of its own and touching it before it is really dry makes for a frustrating experiences.. Three touch ups later, that part was done. 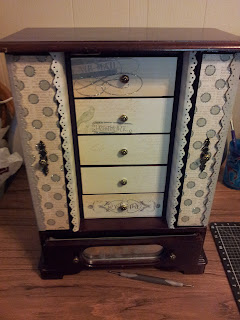 I decided to stop while I was ahead and re-visit it the next day. I had an entire day to think about my next steps. When I got home from work, I started working on the back. The back was much easier than the sides, lots of flat surfaces:)

Before too long the back was complete and I decided to wait to finish the top and the base of the piece. I needed to figure out a way to work around the piece of glass in the bottom drawer. It was glued in place and I knew if I tried to remove it, I would most likely break it... ( i am not to shy to say I am very clumsy).

The Piece was really starting to look good and already I was looking forward to embellishing it with something to add that POP! 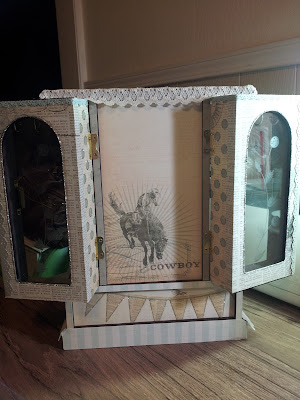 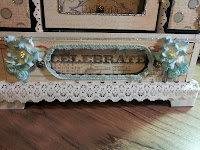 The sides and back were just about done.. it was on to the base.
The glass piece I was concerned about proved to be the hardest part. I literally had to hold the paper and with my finger crease the oval shape. I cut out the oval... trimming a hair off each-and-every time...  until I got it to slip into place. That process alone took about 25 minutes, but at last, it was just the perfect size to slip in that area.

On day three I could see the end in sight. A few more cuts and I would be done. The paper I used was "Lost and Found". I love the blue and brown idea... and the cowboy was pretty darn cute too. 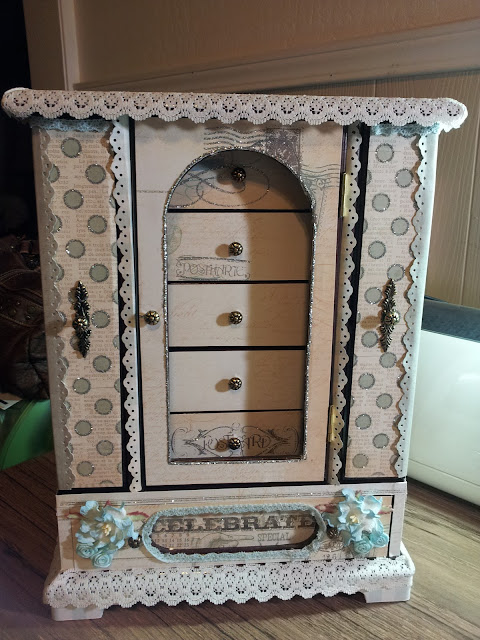 Finished at last. :)
Thank you for stopping by and I hope I have inspired you to create something magical
and remember.... with someones else's Trash, you can have your very own Treasure. 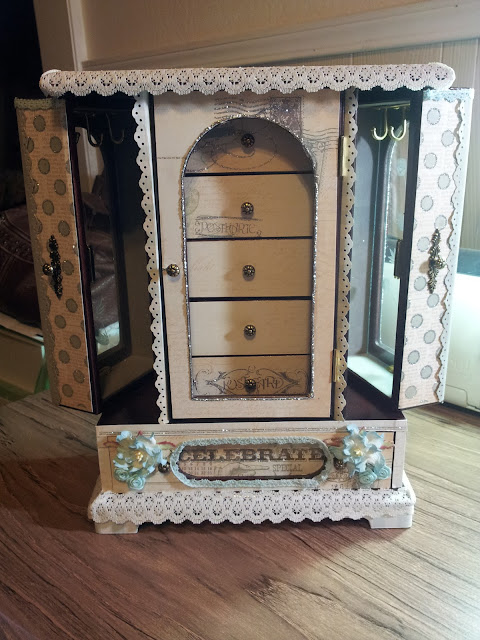 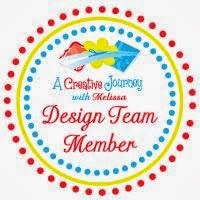